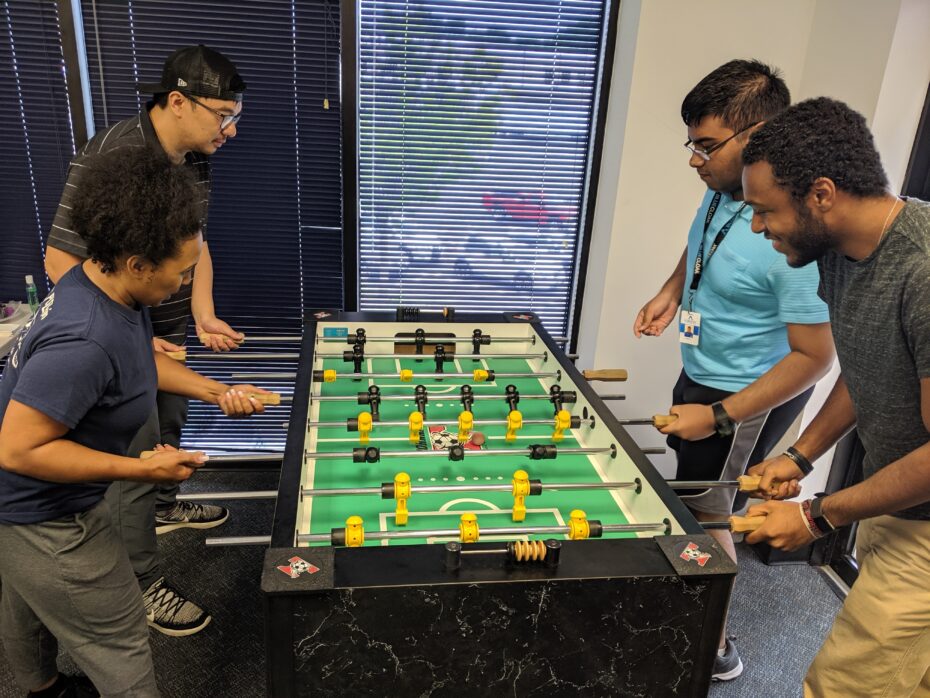 Yesterday, August 15th, Blue Cloak held their second annual summer foosball tournament! While it was a friendly competition by nature, things certainly got competitive. With last year’s winners, Clara and Mario, being separated the field was wide open for a new team of winners. We had 9 teams this year all vying for the right to be crowned champion. The teams were randomly selected this year to try and make things as fair as possible. The resulting teams were: Ayush and David Street, Jeff and Dave Horvath, Nhan and Matt, Vinson and Reno, Malachi and Mario, Ankit and Denzel, Clara and Yao, Juan and Ed and finally Trinh and Thuy.

The first round was intense as it pitted a family against each other (Nhan and Thuy). It was a closely fought battle with Matt & Nhan coming out on top in overtime with a final score of 7-5. The next game was the first game of Round 2 and featured Some of the better players in the office. Juan & Ed were a formidable opponent but Team I Pity the Foos (Jeff and Horvath) ultimately were victorious 9-7. Clara and Yao faced off in a battle with Team Muscle Hustle (Malachi and Mario) which pitted the former victors against each other. When the dust settled the team of Clara and Yao were the first to 5 and got to move on to round 3. Next up was Ayush and Street playing vs Team Reno (Ankit and Denzel with a severe lack of Reno’s on this team) where Team Reno were the better of the two and advanced on a score of 5-0. The final matchup of Round 2 was Team and in a battle vs Team Console Yourself Dead (featuring Reno and Vinson) vs Matt and Nhan. That game was another nail biter, going into overtime with Matt & Nhan being declared the winners after a score of 6-4. That wrapped up the initial round of games with each team either moving on in the winners bracket or getting another chance in the loser’s bracket.

A brief but enjoyable intermission broke up the tournament with a visit from Thuy’s sister and brother in law. They brought homemade pho for the third (insert hyperlink here) time! We had a full spread fit for meat eaters, vegans and vegetarians alike! It was nice to break up the competitive nature brewing in the office with a relaxing lunch to remind everyone of the team first mentality employed by Blue Cloak. But that only lasted so long, we had a champion to crown! 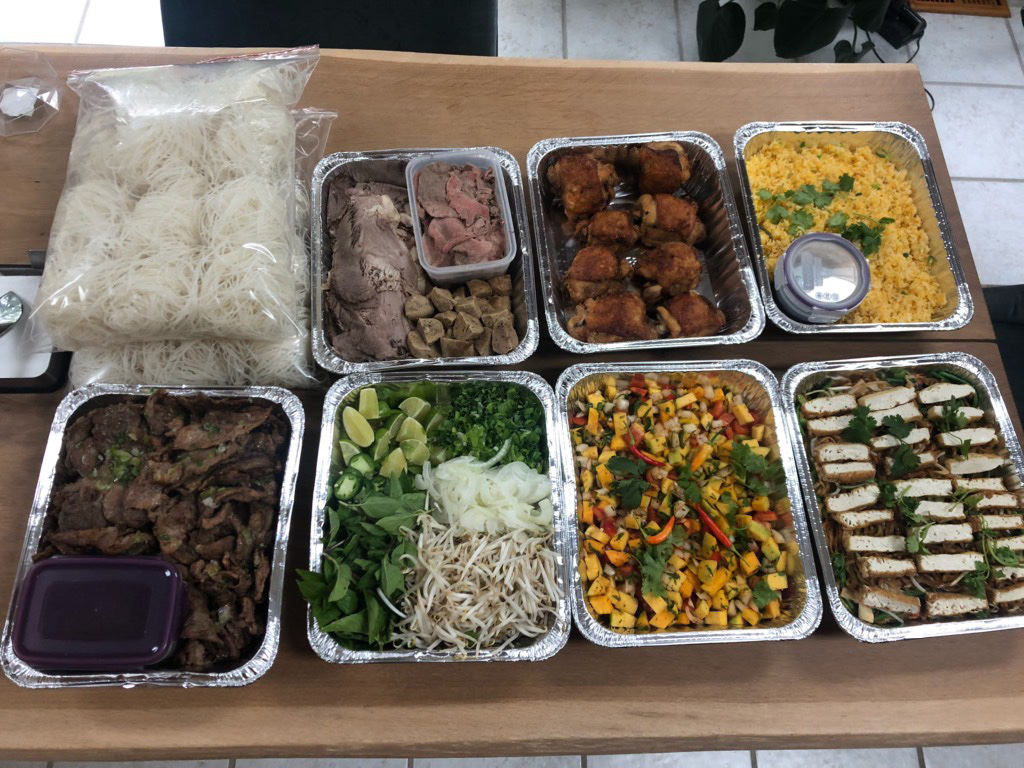 The next game up was Ayush and Kenny (who was filling in for Trisha) vs Team TnT (Thuy and Trinh). It was another hard fought battle with Team Ayush and Kenny winning the match 5 to 3. After that Team Muscle Hustle beat Team Ayush and Kenny on a score of 5 to 1. Going back to the winner’s bracket Clara and Yao defeated Ankit and Denzel in overtime, 6-4, pushing them towards the semifinals awaiting the winner of Nhan and Matt vs Horvath and Jeff. It was a very hard fought battle with Jeff and Horvath coming out victorious on a score of 5 to 3, sending Nhan and Matt to the loser’s bracket and advancing them into the semifinals. This set us up for a showdown between Juan and Ed vs Reno and Vinson. This match was a little anti-climatic as Juan and Ed advanced on a score of 5-1. Nhan and Matt took care of Team Muscle Hustle 5 to 2. This left Team Reno (Ankit and Denzel, just so there’s no confusion here) to face off against Juan and Ed. Juan and Ed easily took care of Ankit and Denzel 5 to 1. This left us the final 4 teams, Clara and Yao, Horvath and Jeff, Juan and Ed and lastly Matt and Nhan. Nhan and Matt had an intense battle vs Juan and Ed, with Juan and Ed outlasting the duo 5-3.

Back in the winner’s bracket the matchup between Clara and Yao and Horvath and Jeff determined who would be advancing to the championship game. This was a back and forth game with both sides coming up with clutch saves, ultimately Horvath and Jeff came out on top after a score of 5-2. That left Clara and Yao to fight for their foosball lives against Juan and Ed in a battle to get back to the championship game. Another game that ended 5-2, this time Juan and Ed were the top team.

That leaves us with the championship game becoming a rematch of the first round, Ed and Juan vs Horvath and Jeff. Being that this was a double elimination tournament, Juan and Ed needed to beat the winner’s bracket champions, Horvath and Jeff, twice to be officially crowned champions. In what was an anticlimactic finish to a wonderful tournament, Horvath and Jeff handled them easily finishing the tournament undefeated after a 5-1 victory.

A valiant effort by all the teams involved and congratulations to the victors, Dave Horvath and Jeff Fox!

To learn more about how Blue Cloak can help your organization, please get in touch.