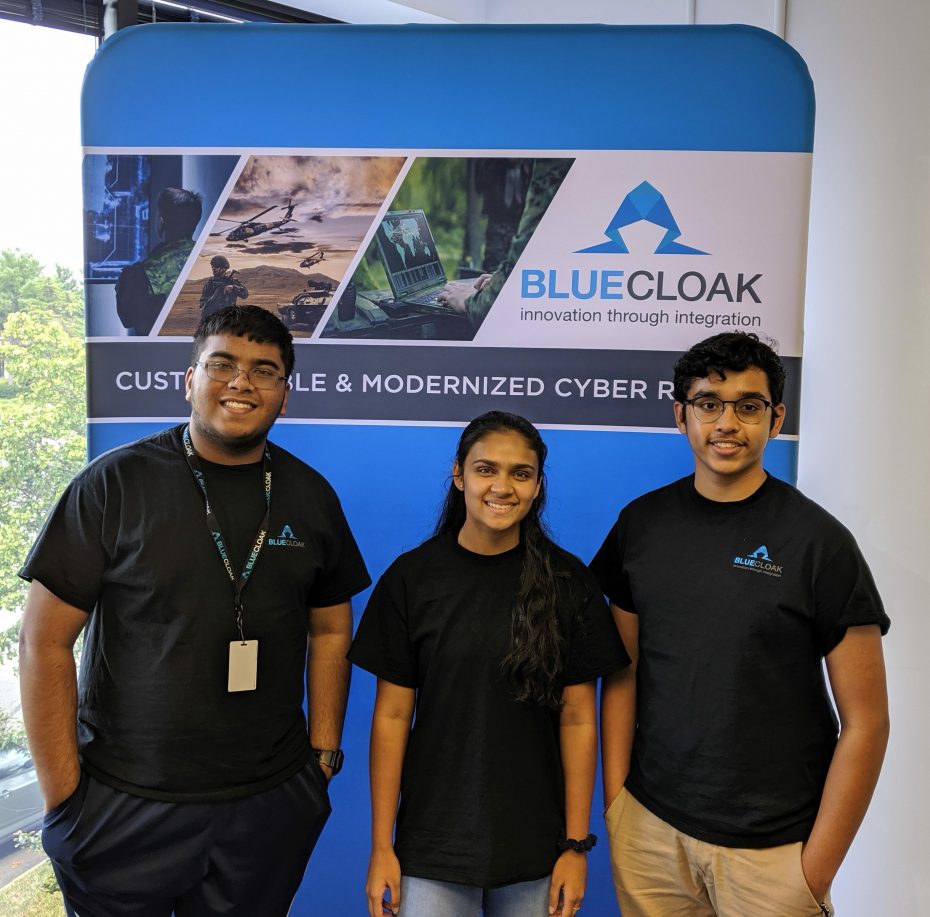 With a heavy heart we said not goodbye, but “see ya later” to our three wonderful interns last Friday the 16th. Trisha, Ayush and Ankit have been apart of the team for the last 10 weeks and did excellent work during their time here. I think it’s safe to say that we here at Blue Cloak got as much out of this as the three students did.

We were treated to a super informative powerpoint presentation on their final day that documented their work. Ankit, Ayush and Trisha wowed us with what they had created through machine learning in just a few months of work. In fact, not only did they wow us, they impressed the committee for the Future of Information and Communication Conference (FICC). The trio are one of only 250 presentations occurring in the San Francisco conference in 2020! What an enormous honor! They will be presenting their research on CAMLPAD, Cybersecurity and Autonomous Machine Learning Platform for Anomaly Detection. In the most basic terms, it’s an end-to-end system for intelligent, automatic anomaly classification. Not only was this project accepted to be presented in front of experts in 2020, it’s research paper was also accepted into the Cornell Archives! They completed all this while still organizing a foosball tournament for the office and even gifting each of us our own personalized foosball as a thank you.

I got to sit down after the presentation to chat with all three of them and ask a few questions. When asked if they could narrow down what their main takeaway was into one sentence, I got some interesting responses. I had expected something very technical and possibly based around machine learning, but that is not exactly what they said. Trisha let me know that she realized that you just “figure it out.” She told me that in school there’s other resources to use and find an answer, but with this internship she gained the experience to work on it herself. “I realized that I had to look at it from a different angle. You’re going to get it, just don’t ever give up.” How insightful! What a valuable lesson to learn!

Ayush explained to me that he learned to “pave your own road.” When they started nobody told them exactly what was expected of them. There wasn’t a specific end goal that must be completed before the 10 weeks were over. That helped him get into a mindset of creating something of his own. He told me instead of a one way mindset he had to “take the data and make something out of it.” I think it’s an understatement seeing as though they are flying to San Francisco to present what they made, but I understand the sentiment. Great job making something out of it!

Ankit’s answer was very surprising to me. Ankit is very goal motivated and even told me that going to the bay area has been a dream of his for awhile as it is at the “forefront of AI learning.” He has completed 3 separate internships before graduating HS. It would be a severe undersell if I told you he was simply an accomplished student. When asked if he could summarize what he gained from this internship with Blue Cloak, Ankit’s response was that he improved his interpersonal skills. He told me that because of the culture Blue Cloak has built, he felt more comfortable to reach out to others and build informal friendships and formal business-minded relationships. I was blown away. I thought that was an extremely intuitive answer and one I did not expect at all.

That was exactly what we wanted to hear, though. Our goal for these internships is not strictly just research and data driven. We want to open the eyes of the youth to the excitement and possibilities that are involved with cybersecurity. We’re happy to provide the experience and environment to learn, but equally happy to help promote growth of the students as people and individuals. If we want to further the field we must get the next generation excited about cybersecurity and penetration testing. I think it’s safe to say that after these 10 weeks we can add Ayush Hariharan, Ankit Gupta and Trisha Pal to that list. Thanks for playing! We can’t wait to see where you go next!

To learn more about how Blue Cloak can help your organization, please get in touch.